This online photograph album not only captures St Wilfrid’s past history, but also illustrates in pictures the difficulties encountered by our forebears. The congregation of St Wilfrid’s today, worship in what is the fourth Church on the present site. Each Church has been larger than its predecessor, built in order to accommodate a growing congregation and with God’s help, coupled with the people’s devotion, it will continue to grow. (Photographs and text from the book created by David Robertson which is located in the Church Porch)

The Parish of St Wilfrid’s began its long journey in a small room above a brewery in Battle Road in 1917, and due to the determination and resilience over the years by both the clergy and the town’s Catholics, it has grown into the strong community that we witness today. 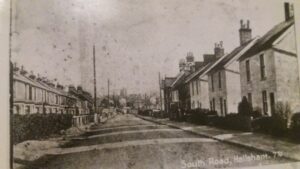 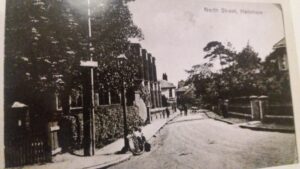 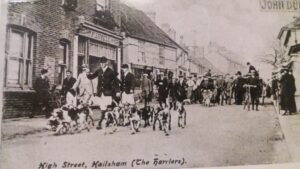 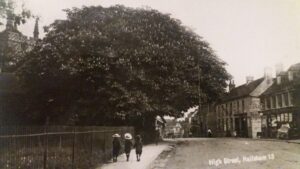 The arrow in picture 1 shows the rented room over the then brewery in Battle Road, where Mass was first said in July 1917. It remained the Mass center in Hailsham, until August 1922. Entrance was approached by a door at the rear of the building. After Mass, half an hour was allowed for Catechism of the children, after which the room was required for work purposes. 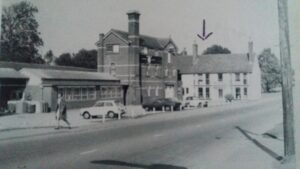 The first established Church, built on the present site in 1922. From 1955 – 2015 the building was used as a Parish Hall until in 2015 where it now serves as the Parish Meeting Centre.

The structure measured 30ft by 15ft and was designed by Eastbourne Curate Fr Alexis Hauber, and built at a total cost of £701.10 and took 3 days.

A later view of the Altar in the first Church, taken around the outbreak of the Second World War. The Blessed Sacrament was removed from the Church at the beginning of the war, and the Church closed as it was considered unsafe. Mass was then said in the hired Summerheath Hall. Mass was resumed for a short period following the war’s end, prior to the setting up of St Wilfrid’s second Church. 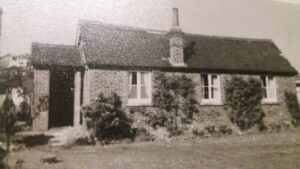 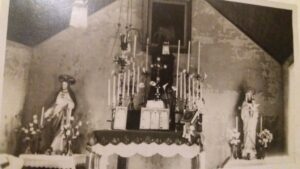 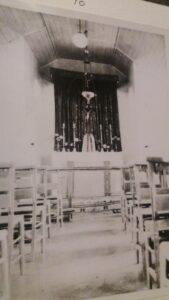 The second Church of St Wilfrid’s.

Certainly no ornament, but nevertheless a welcome relief for the Parishioners at that time. Much larger in size, it was bought cheaply thanks to a poorly attended auction following the military occupation of Park House, Hellingly by Fr Frost in 1946.

The first Mass was held on Rosary Sunday in 1946. With the coming of the new Church, the Nissan Hut was offered for sale, but with no purchaser forthcoming, it was demolished in July 1955. It’s concrete base used to be visible within the church grounds until in 2015 the concrete was dug up and our current church was built upon the location. 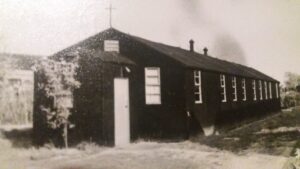 The ceremony of the laying of the foundation stone of the third church was conducted on 12 June 1954. 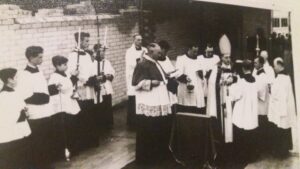 Local planning was granted on 28 August 1952 and built at a cost of £4,000 by Richard Thorpe of Southborough, Kent. Designed by Mr Bingham Towner of Uckfield, it was his first of many Church designs for our Diocese. The new Church was blessed and the first Mass offered by the Bishop of Southwark on Ascension Day 19 May 1955. 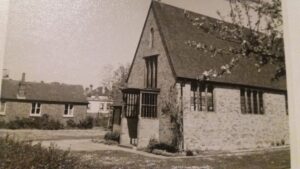 The first Church garden fete (seen in the picture below) held in the church grounds, August 1958. Opened by Lord Hailsham (Mr Quentin Hogg) seen on the right in the picture.

The new Presbytery built within the Church grounds by local builder Thomas Rich. Again designed by Mr Bingham Towner, it hasn’t changed to this day.

In September 1959, the hedge was removed and replaced with a much improved chain-link fence. 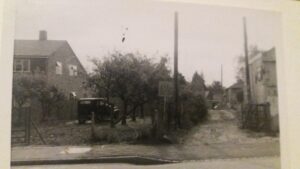 This church was decommissioned in 2015 upon the completion of our fourth and current church, it is now used as the Parish Hall.

The Arundel & Brighton Diocesan Trust is a Registered Charity No. 252878